CQ Inland Port is located at Yamala, only 25 km from the township of Emerald, Queensland. The CQ Inland Port site has been identified in the Central Highlands Regional Council Planning Scheme (2016) as Special Industry Zone which is further surrounded by a greater area zoned industrial investigative. This provides greater flexibility and advantage in terms of potential activities. 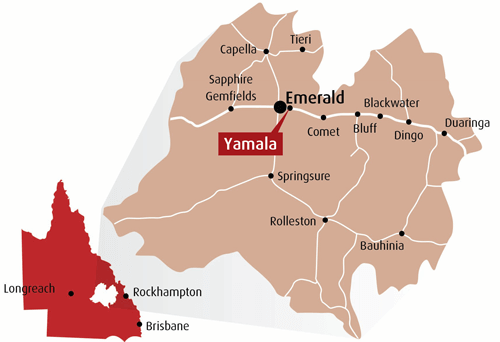 The Central Highlands Region is one of Australia’s most productive primary producing regions. It has sustainable water supplies from the Fairbairn Dam which supports the thriving citrus, grain, nut and livestock industries. Emerald is also the major centre for the Southern Bowen Basin mining region, which supplies the world with high quality thermal and metallurgical coal. Emerald township is a jewel in Central Queensland and a most liveable inland community.

CQ Inland Port is situated on the Capricorn Highway, being the major link between Rockhampton, Longreach and beyond to North West QLD and Northern Territory.

Central Highlands Regional Council has a listed Yamala Enterprise Area feeder road network as a priority project. The feeder roads will be a direct link to CQ Inland Port connecting the Capricorn & Gregory Hwy with Intermodal terminal and rail access.

The Central Highlands regions economy is diverse and rich in minerals and agriculture, thriving on irrigation sourced from water storage from both the Nogoa and Comet rivers. Over 100 million tonnes of coal are extracted annually and remains Queensland’s most important export commodity. The region also boasts the largest sapphire-producing fields in the Southern Hemisphere.

An indication of the diverse economy is illustrated in the results from recent freight survey.

The key strength of the region’s economy lies in its vast diversity and is based on an enviable global coal mining industry alongside a robust and resilient agricultural and horticultural industry, including;

A growing tourism market supported by pristine natural attractions, such as Carnarvon Gorge and the Sapphire Gemfields.

Major health and education services including a GP Super Clinic, a CQUniversity campus and the Emerald Agricultural College.

CQ Inland Port offers Road Train (Type 1) access from the Gregory Highway that links northern Qld to the southern states of NSW & Victoria and the Capricorn Highway that runs east west from Rockhampton to Central Qld and onto the Northern Territory.

The CQ Inland Port is ideally situated for product to be delivered to the eastern seaport of choice, namely Gladstone, Mackay, Townsville, and Brisbane, by road or rail.