Get aboard grain train 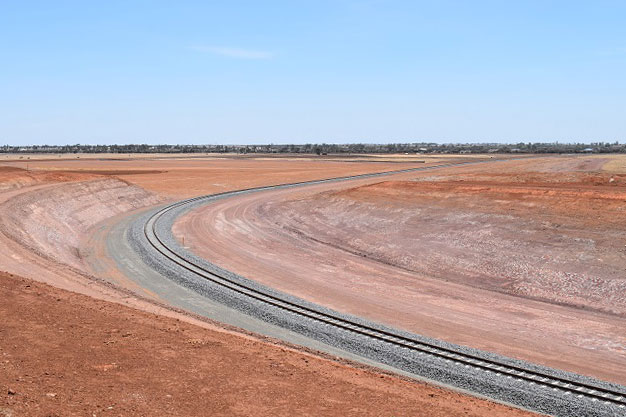 THE Central Queensland Inland Port (CQIP) is beginning to take shape with the completion of earthworks and a 1.6-kilometre rail siding, and one of the key investors, GrainCorp, on track to have an $18.5-million grain handling facility ready for next year’s winter crop harvest.

Partially-funded by the local, state and federal governments, CQIP is a large-scale development on a former rural property adjoining the Capricorn Highway and Rockhampton-Longreach railway line at Yamala, 23 kilometres east of Emerald. 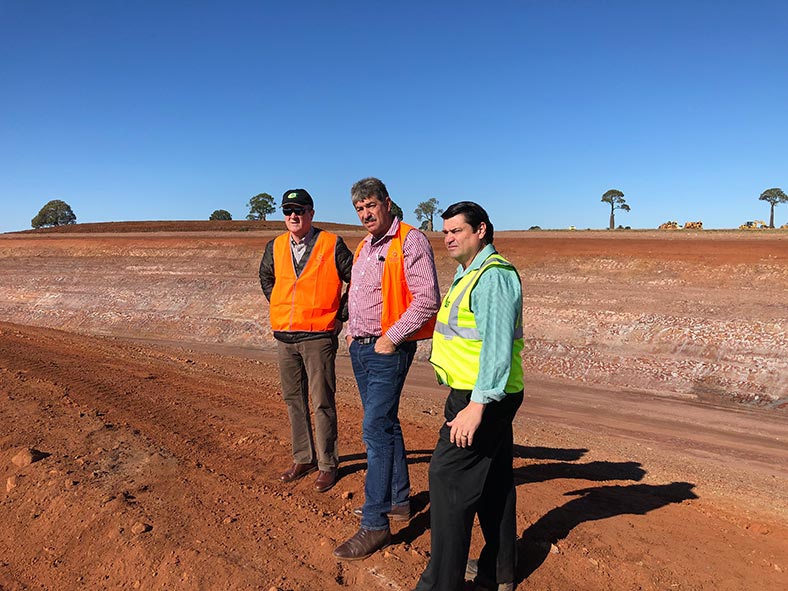 The first stage of the $9.5 million CQ Inland Port rail and road upgrade near Emerald is expected to be completed in early October.

‘I look forward to the opportunities this site will bring to our region through space for industry and improved connectivity.’

‘The next stage includes setting up the intermodal operation that will reduce supply chain costs for imports and exports into the region, and identifying innovative alternatives for supplying energy to the facilities’ Mr Stent-Smith said.

He said the project would not have been possible without the good working relationships of various levels of government.

Council supported the project through a co-contribution of $695,000 towards infrastructure upgrades to the site, in partnership with the Queensland Government Building our Regions program, Australian Government and industry funding.

THE first step towards the long-awaited Central Queensland Inland Port project at Yamala began this week with crews ready to begin road upgrades.

Central Highlands Regional Council Mayor Kerry Hayes said it is a step forward for the region.

THE first step towards the long-awaited Central Queensland Inland Port project at Yamala began this week with crews ready to begin road upgrades.

Central Highlands Regional Council Mayor Kerry Hayes said it is a step forward for the region.

$9.5 million of rail and road upgrades are the first step towards the development of an intermodal and grain hub near Emerald, in Central Queensland.

Commercial real estate firm Colliers is selling packages of land around the future intermodal terminal site, which is being built alongside Queensland Rail’s Central West system.

THE CQ Inland Port has taken a significant step forward with a $9.5 million rail and road upgrade officially under way.

The works will build a 1.5km dead-end rail siding, capable of handing 42 wagons, upgrade Bonnie Doon Rd intersection at the Capricorn Hwy and rail crossing, and upgrade the industrial access road to the rail siding.

A $9.5 million rail and road upgrade at Yamala is officially underway, paving the way for the new Central Queensland (CQ) Inland Port.

Minister for State Development, Manufacturing, Infrastructure and Planning Cameron Dick said the project was funded by the Building our Regions program ($4.4 million) in partnership with industry ($4.41 million) and Central Highlands Regional Council ($695,000).

FEDERAL funding announced on Monday will help realise two major projects that are key to the Central Highlands' economic growth and sustainability.

The Coalition Government has committed more than $2.9 million for the CQ Inland Port near Emerald and the Central Highlands Development Corporation's Export Ready program.

The Federal Government has pledged $2.9 million, or half the proposed cost, to the building of infrastructure which will service the developing greenfield intermodal terminal at Yamala near Emerald in Central Queensland.

Get aboard grain train

Great news this week with the announcement of Queensland Government funding contribution to the CQ Inland Port and… I never thought I would see chickpeas on the front page of the Courier Mail but here it is. What a magnificent sight, particularly given the Central Highlands grows about 15 percent of the national desi-chickpea crop and was such a considerable contributor to the Queensland crop last year.

A new state-of-the-art grain handling facility will now be built to anchor the proposed Central Queensland inland port near Emerald after the Queensland Government today announced funding for a new rail siding connecting to the site.

The site of a future intermodal freight hub at Yamala has been unveiled. The facility is set to transform the local agriculture industry; improving productivity and supply-chain efficiency.

The CQ Inland Port site at Yamala, about 25km east of Emerald, has been one of the key development opportunities discussed today at the CHDC Investing in Our Futures Conference 2016.

CQ Inland Port proponent Mr Alan Stent-Smith outlined progress to over 20 people who attended an on site briefing. Mr Stent-Smith said “With over 240 hectares already approved to include an intermodal road/rail facility, state of the art grain terminal, and over 40 opportunities for industry to set up at a flood free, well buffered site, the Inland Port is integral to the Central Highlands future.

“I see the growth potential for this region covering horticulture, agriculture, and resources.

“Central Queensland is the location that can make the most of these opportunities with everything necessary to build and grow the region,” he said

Mr Stent Smith is a grazier who is currently like many, in the midst of the chickpea harvest – crying out for efficient bulk rail facilities in addition to the ability to containerise commodities when required.

With developing Asia forecast to contribute 60% of future world growth and our proximity to these growth nations and the unmet global demand for protein, there are so many opportunities for the Central Queensland region.

CQ Inland Port offers Road Train (Type 1) and B Double road access, north-south via the Gregory Highway. Linking Northern QLD with NSW. The Capricorn Highway links to the East Coast from Rockhampton to Central QLD and beyond to Northern Territory.

From the CQ Inland Port, there are 20 tonne axle load rail links to Gladstone, South to Brisbane, and North to Mackay and Townsville, seamlessly integrating the site into the existing Queensland rail network.

The CQ Inland Port is ideally situated for product to be delivered to the eastern seaport of choice, namely Gladstone, Mackay, Townsville, and Brisbane, by road or rail.